It is a festival dedicated to love and hope. Its name is derived from the story of Saint Yakinthios ... which has the shape of a Cretan mitato, a circular building made of flat stones with a dome Next to the chapel, has been built a stone theater ... ... where concerts are taking place under the shadow of trees ... and Cretan folk tradition with music and traditions from other places of Greece and the Mediterranean 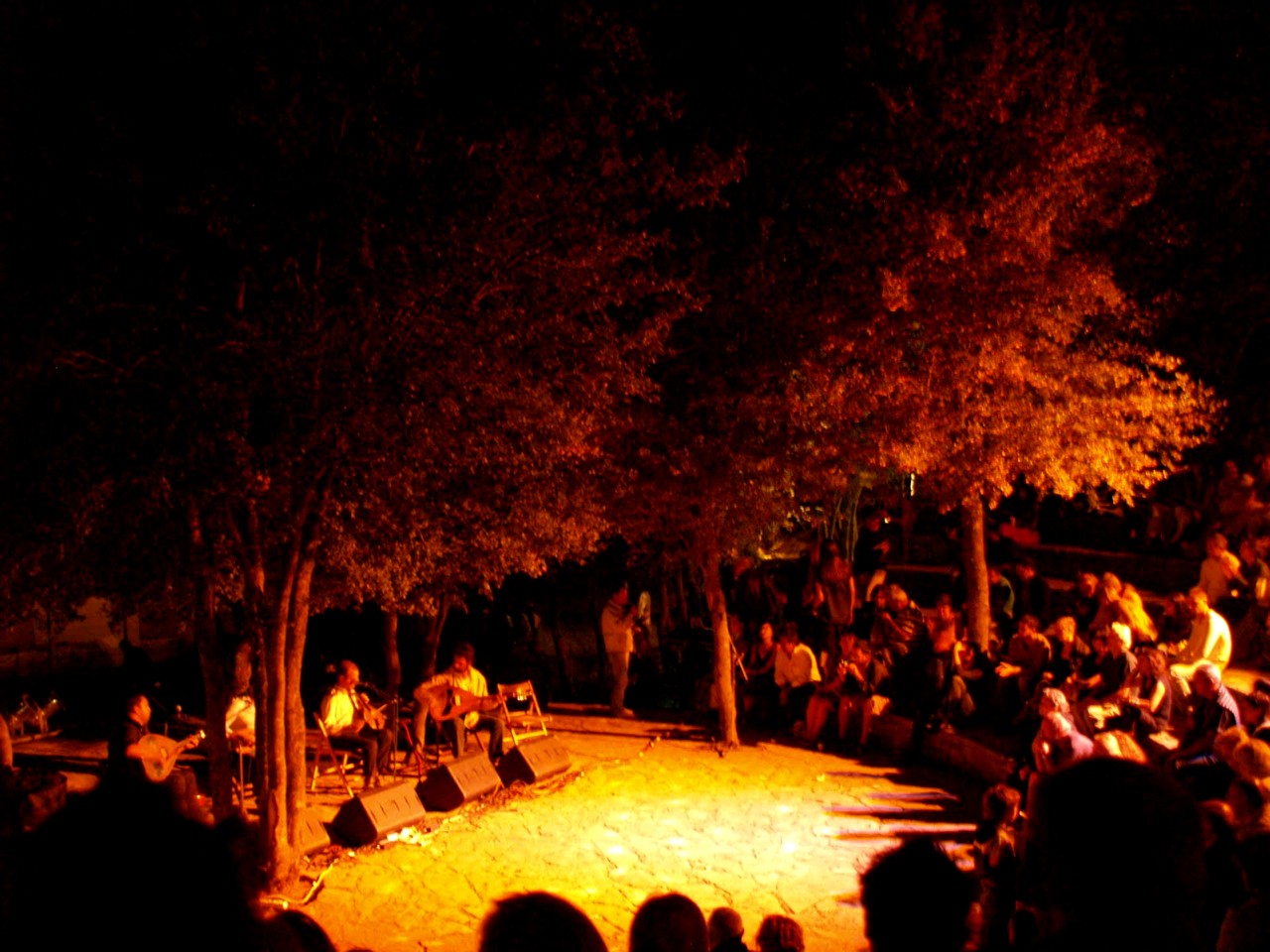 The Nida Plateau on Psiloritis Mountain

Yakinthia is an artistic cultural festival that takes place every year in July on Crete in the village of Anogia.

It is a festival dedicated to love and hope. Its name is derived from the story of Saint Yakinthios.

Events are taking place in the area that has been specially configured for this purpose in a place of Psiloritis mountain, just after Anogeia village, at an altitude of 1260 m.

There has been built a chapel dedicated to St. Hyacinth (Agios Yakinthos), which has the shape of a Cretan “mitato“, a circular building made of flat stones with a dome.

Inside the chapel, there is a full-body figure of St. Hyacinth.

Next to the chapel, has been built a stone theater, where concerts are taking place under the shadow of trees.

The topic of the first Yakinthia festival was the “Magnus Eroticus” (Megalos Erotikos) and was dedicated to the remembrance of Manos Hatzidakis.

Since then, every year Yakinthia has a different topic and generally joins together Cretan music and Cretan folk tradition with music and traditions from other places of Greece and the Mediterranean.

It is an important institution of cultural creation in our country and a benchmark for Mediterranean cultural exchanges, while it participates in the network of the most famous Mediterranean festivals.

Yakinthia Festival is “challenging” the spirit and the body with a different topic every time and attendees live a unique mental and physical experience in the natural environment.

Saint Hyacinth (Agios Yakinthos) was a native from Caesarea in Cappadocia and lived during the reign of Emperor Traianus (98-117 AD).

He was a man with an exceptional attitude and was chamberlain of emperor. When Traianus ordered persecution against Christians, Hyacinth proclaimed his faith and did not hesitate to confess in front of the emperor that he was a Christian. As a result he was imprisoned with no food, unless he wanted to eat meat which had been blessed for sacrifice to the gods (the eating of which was banned by Christianity). Thus, he starved to death, dying at the age of twenty.

Saint Hyacinth is the Saint of sentiments and love.

The poet, songwriter, and singer from Anogia, who they call "Loudovikos from Anogia" wants to make the story of the young martyr, who supersedes his fear through love, known to the public.

And because 1.900 years have passed since the martyrdom of Yakinthos, he decided to honor the Saint of Love and sing together with him of the poetry of love.

Thus Loudovikos founded together with spiritual men and artists an institution called "Corporation of Friends of Yakinthia Events", which organizes the Yakinthia Festivals.

The artistic events, which take place every year in the first week of July at the same place called Fourni and in the Cretan village of Anogia are thus called YAKINTHIA. The idea to build a church at the same place came from the Archbishop of Rethymnon, Anthymos, who himself laid down the foundation stone.

The chapel is built in the shape of a Crete "mitato", a circular building made of flat stones without mortar 1.200 m above sea level. The building was realized after the rules of the Late Minoan architecture with a dome.

The inclination starts above 2 meters and leaves a hole of 30 cm at the top. The planning and control were realized by the architect Stavros Vidalis.

The reviews for the Yakinthia Museum of Religious Art or St. Aikaterini Museum situated northeast of the Cathedral of St. Minas, this church once belonged to the Monastery of... Houdetsi Festival is a 4 day celebration of music, food and art that takes place in the little village of Houdetsi located 23 km due south of... The town of Rethymno organises the greatest carnival parade on the island of Crete and one of the most impressive of Greece. Lovely Summer and superb days with good music, theater, exhibitions and art in May in the picturesque small town of Rethimno. The Renaissance Festival in Rethimno

Since 1987 the famous Renaissance Festival has been organised by the Municipality of Rethymno every summer.