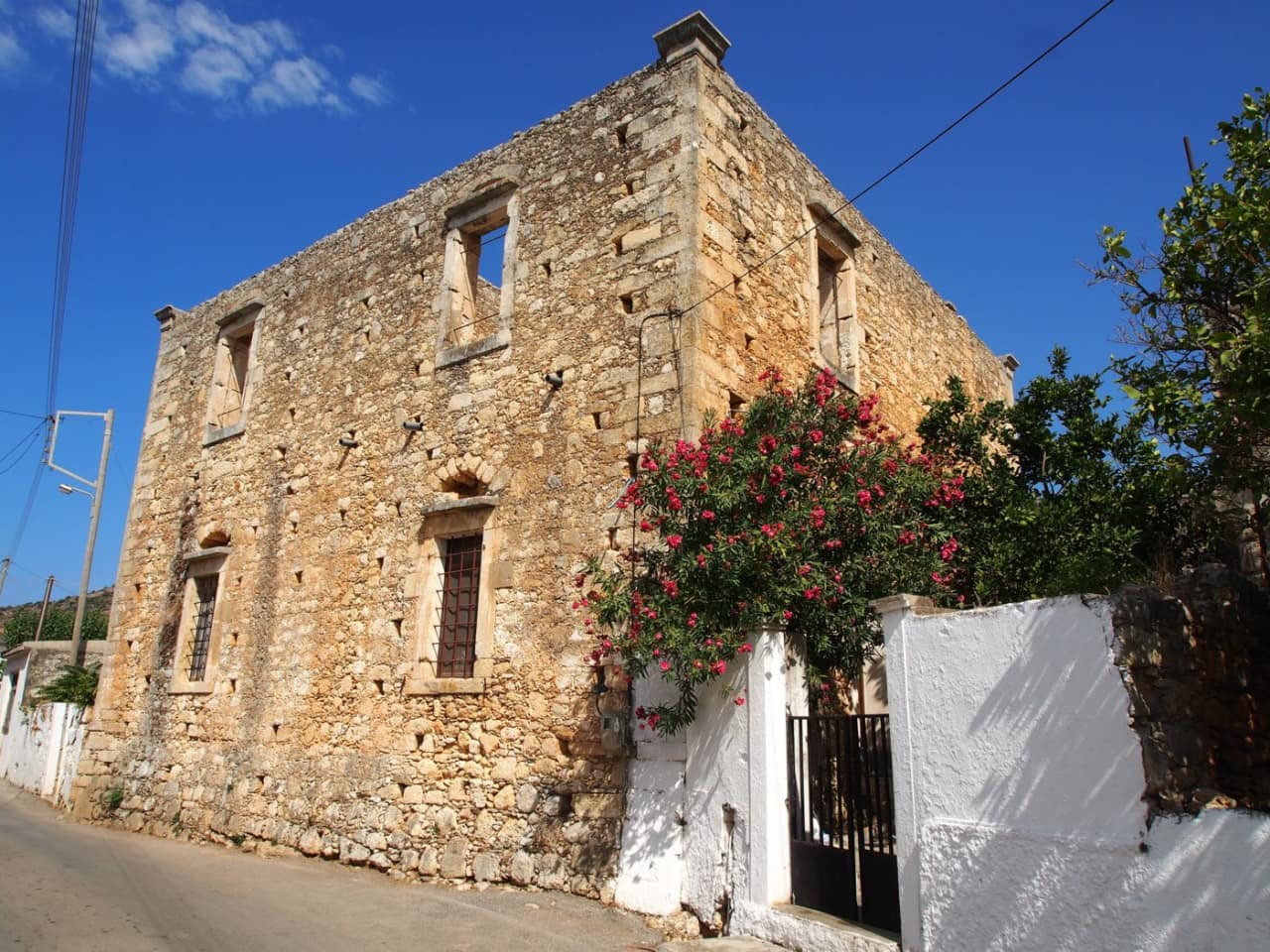 Melidoni is a Village in Geropotamos in Rethymno 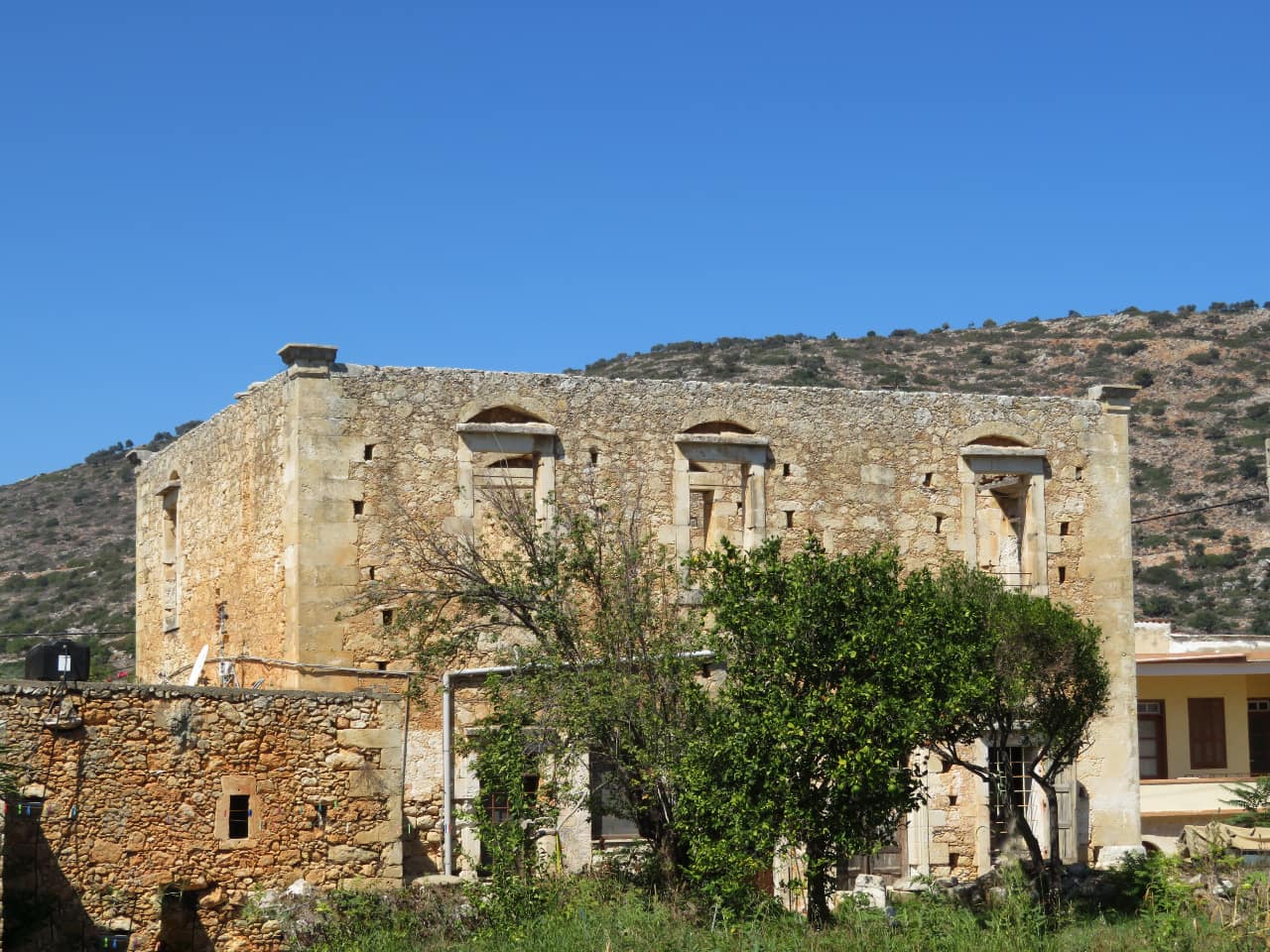 Melidoni is also a listed traditional settlement, a Municipal district ... 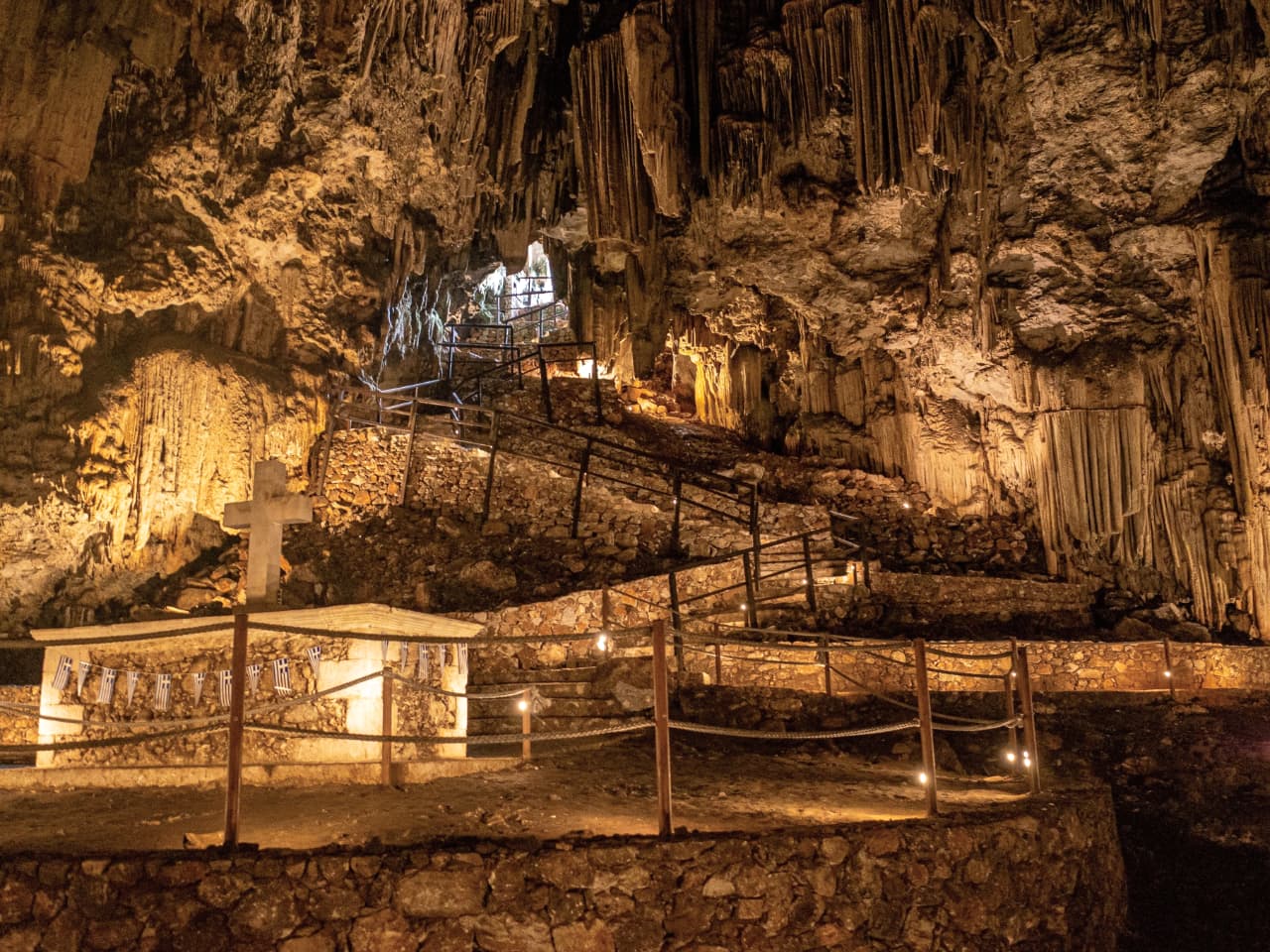 ... and a Minoan sacred cave 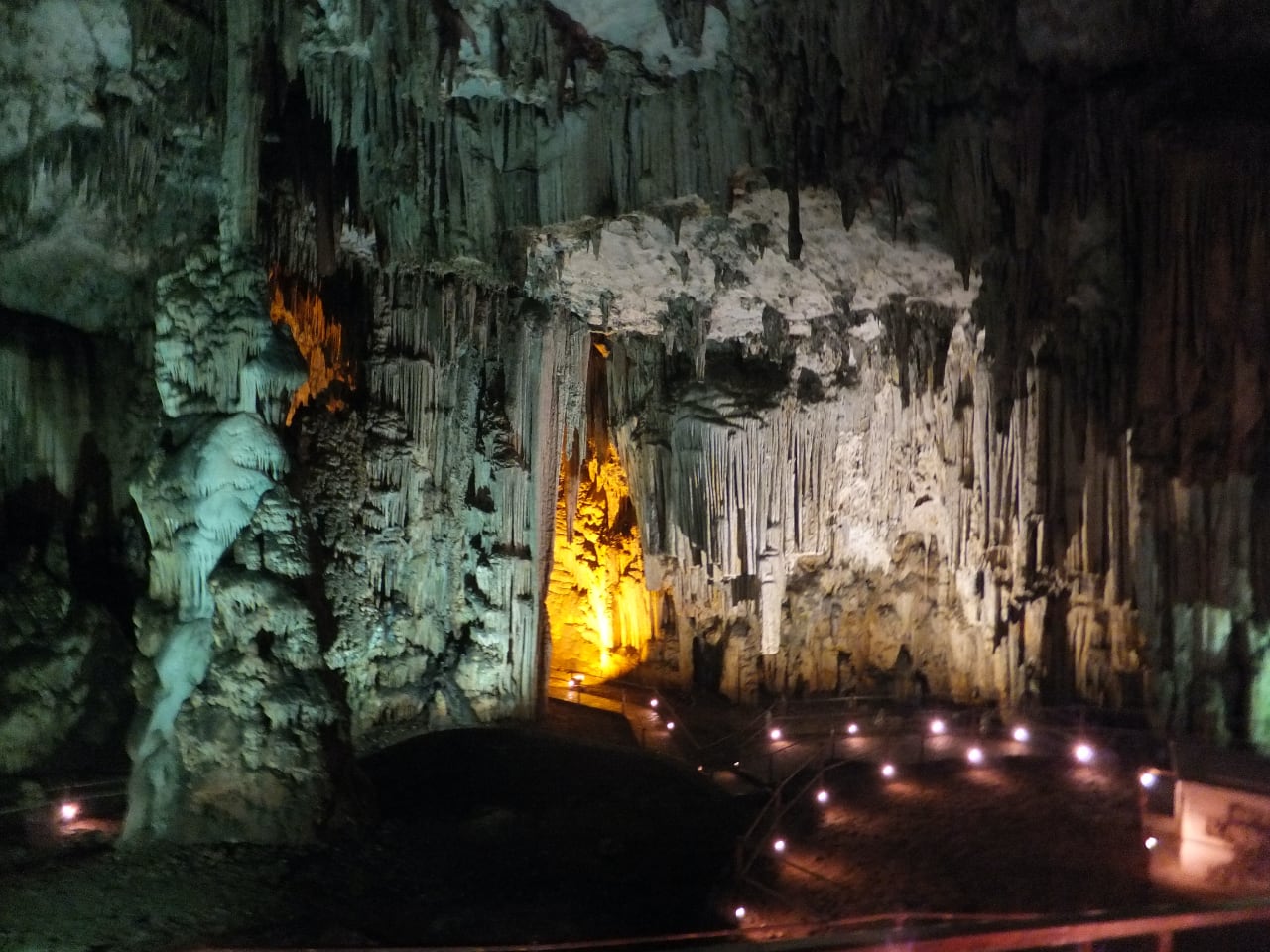 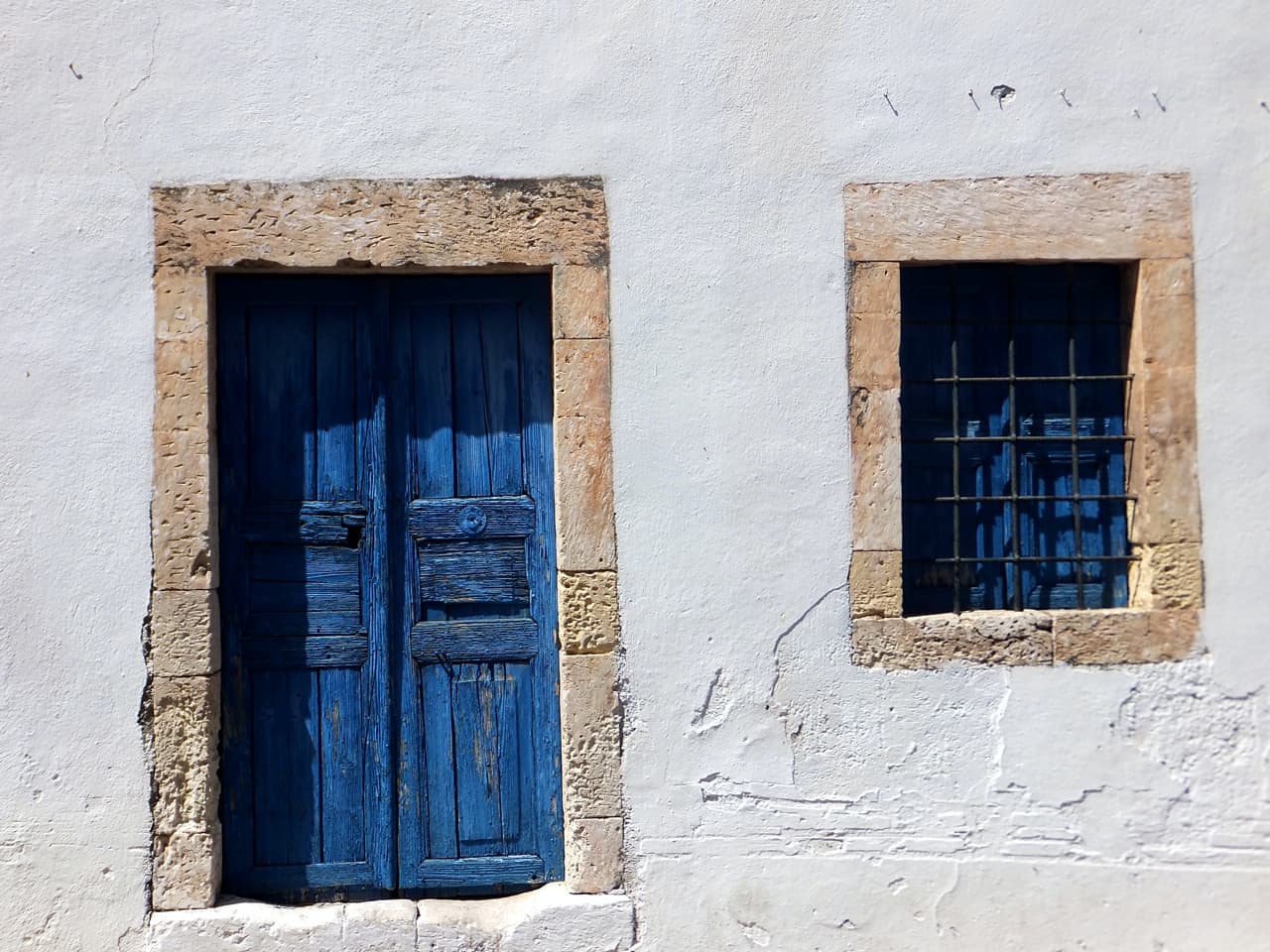 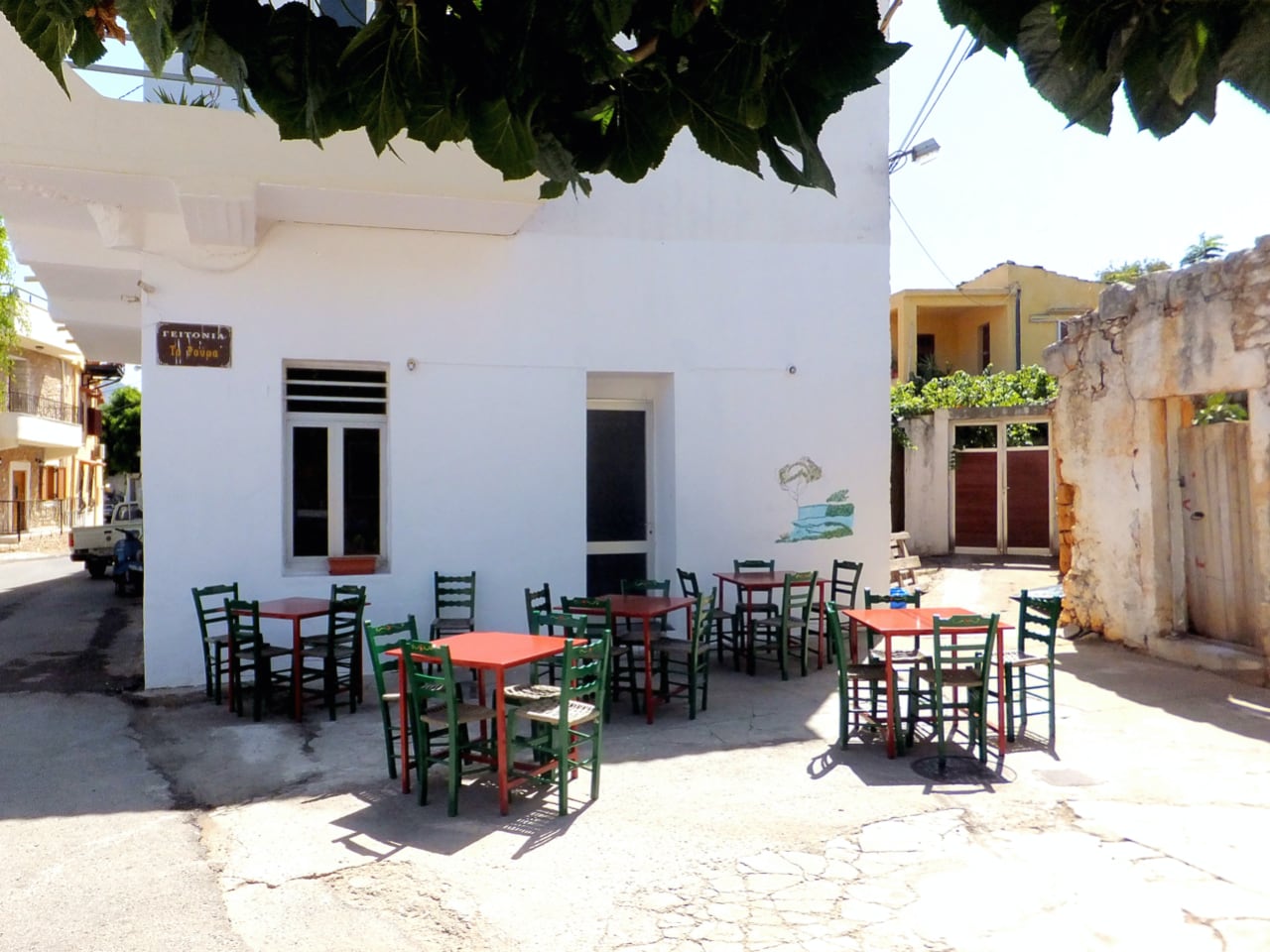 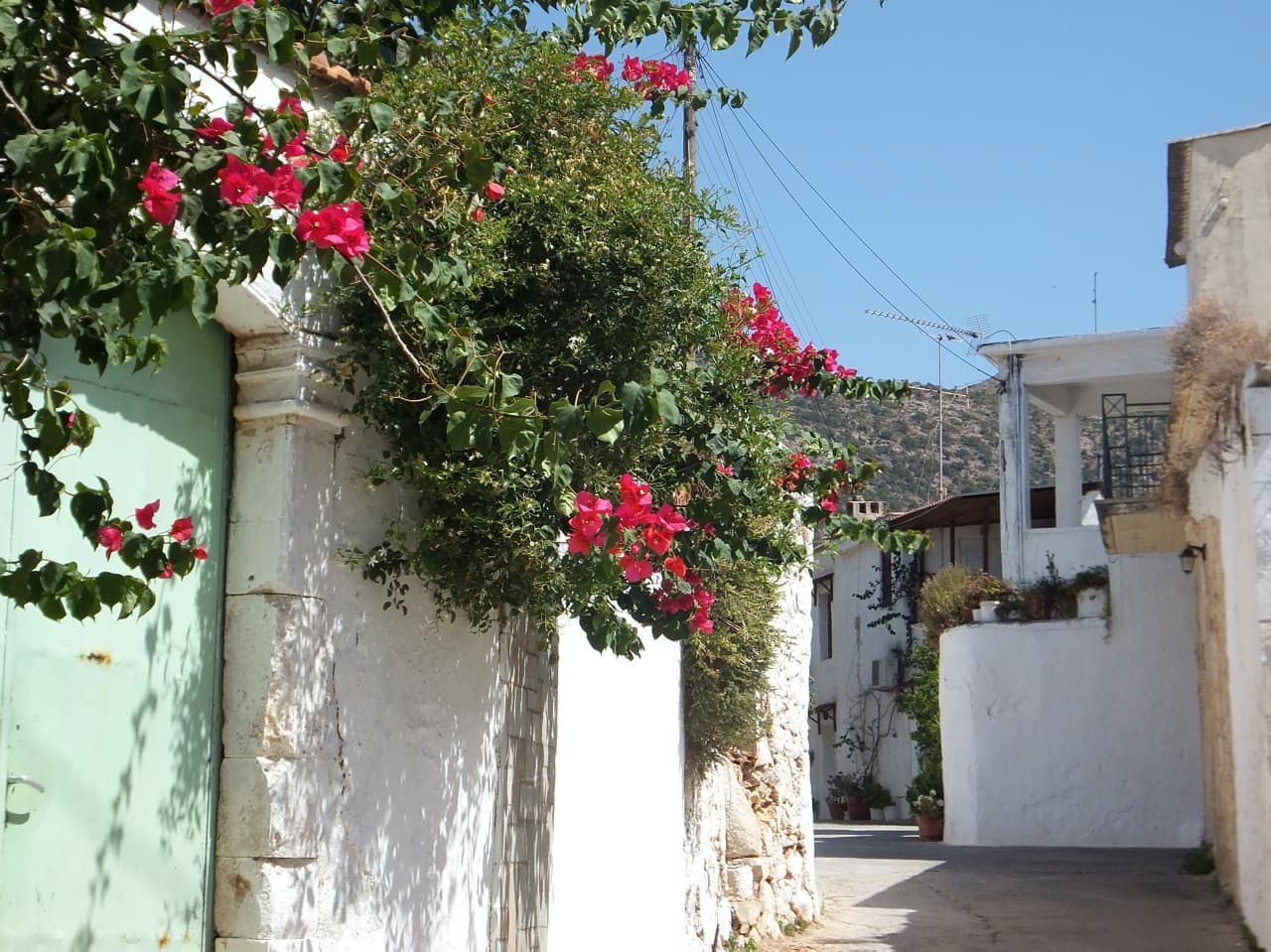 The village now has developed considerably although there are still some old Venetian buildings ... 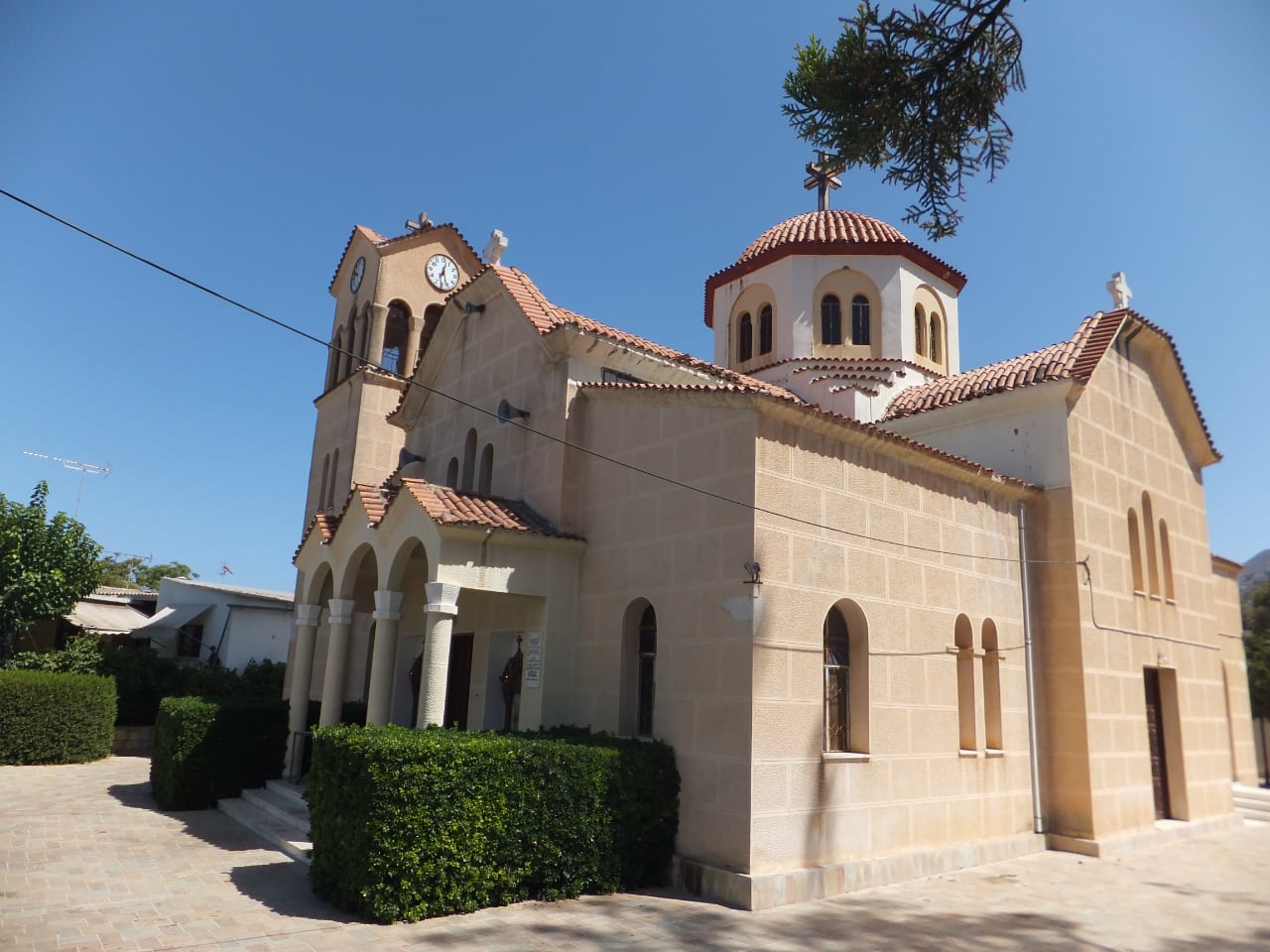 ... to be seen in the back streets if you take a walkthrough 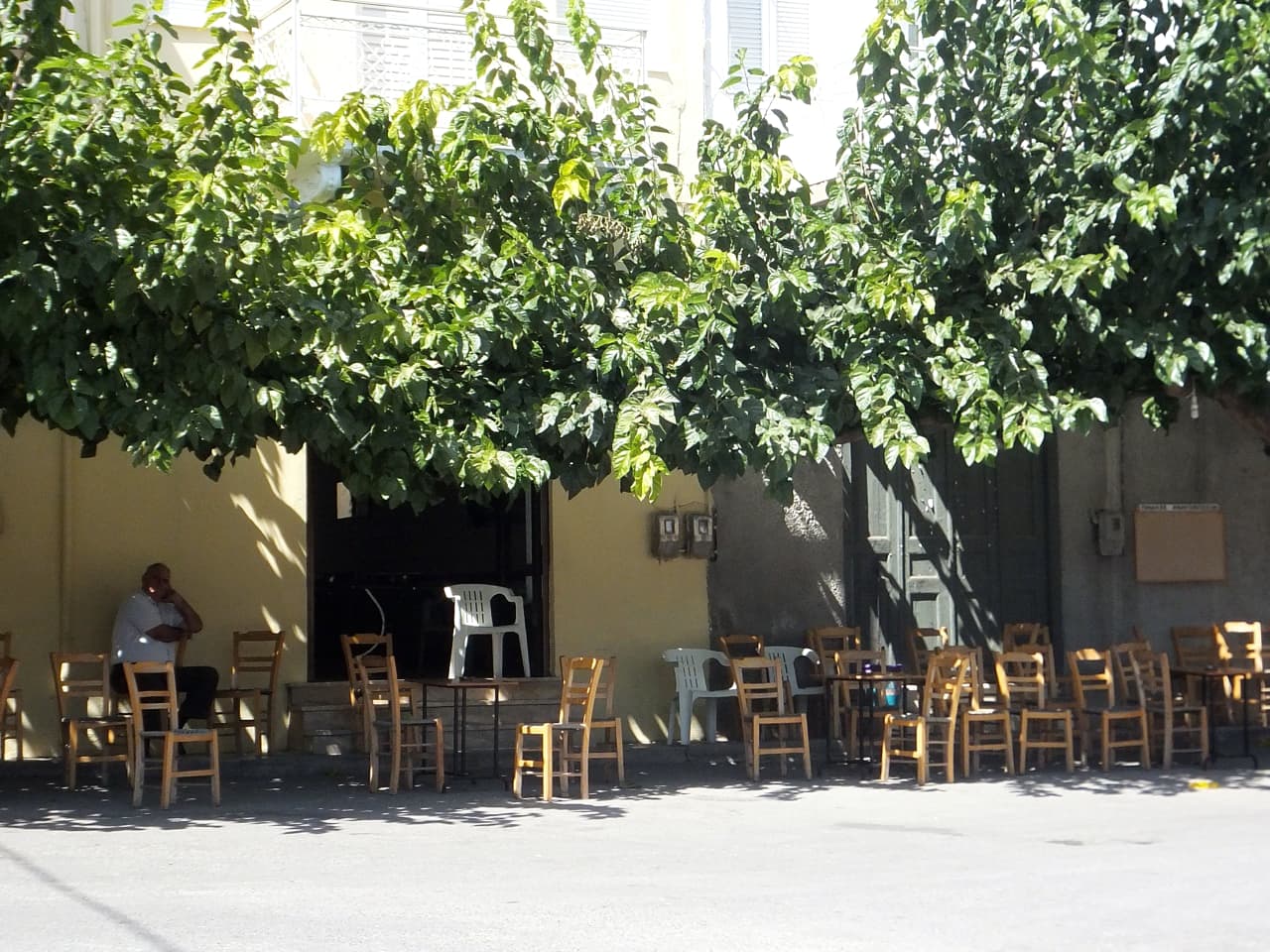 The Kafenio in the centre of Melidoni Village - Greek Coffee time 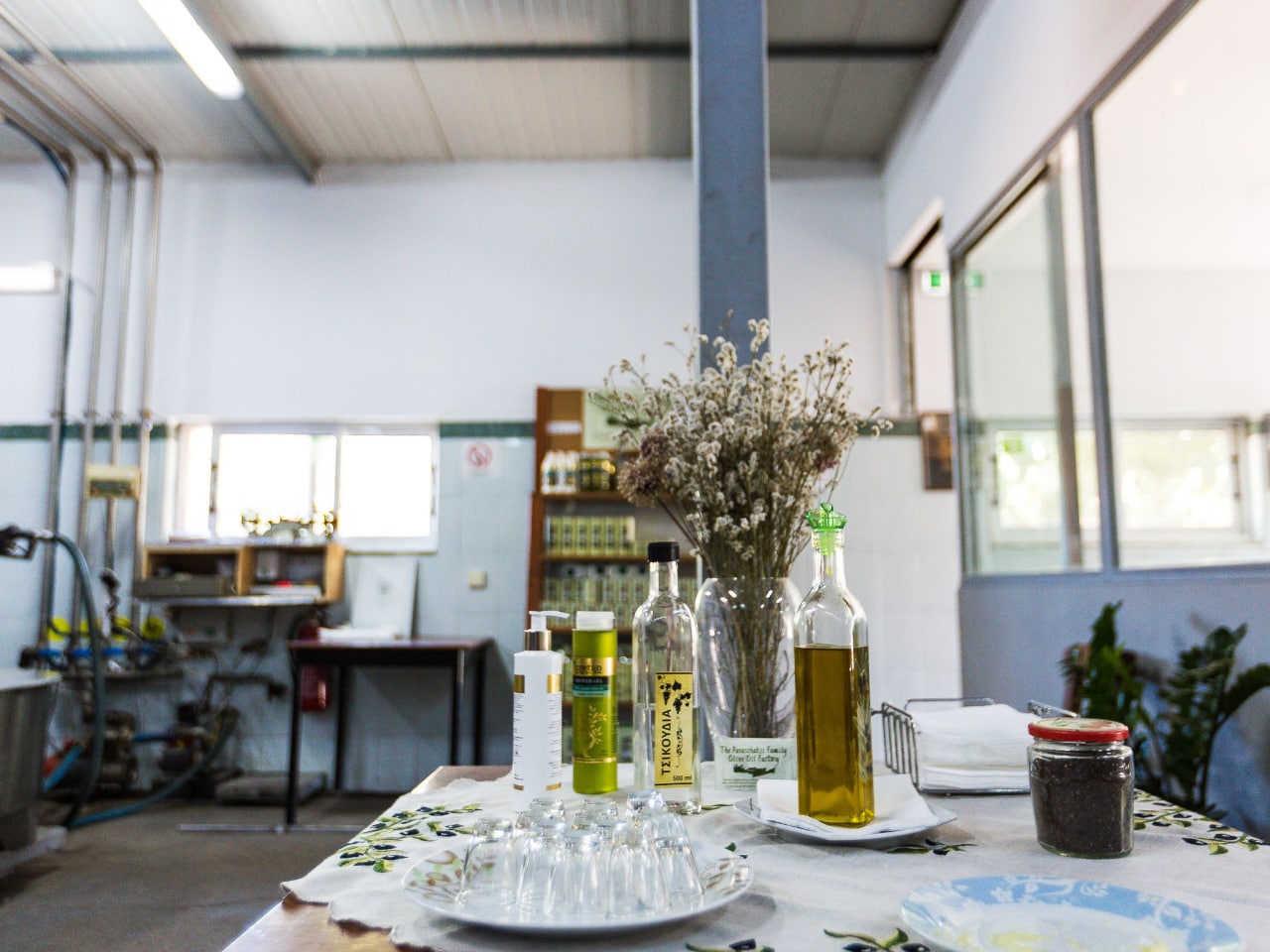 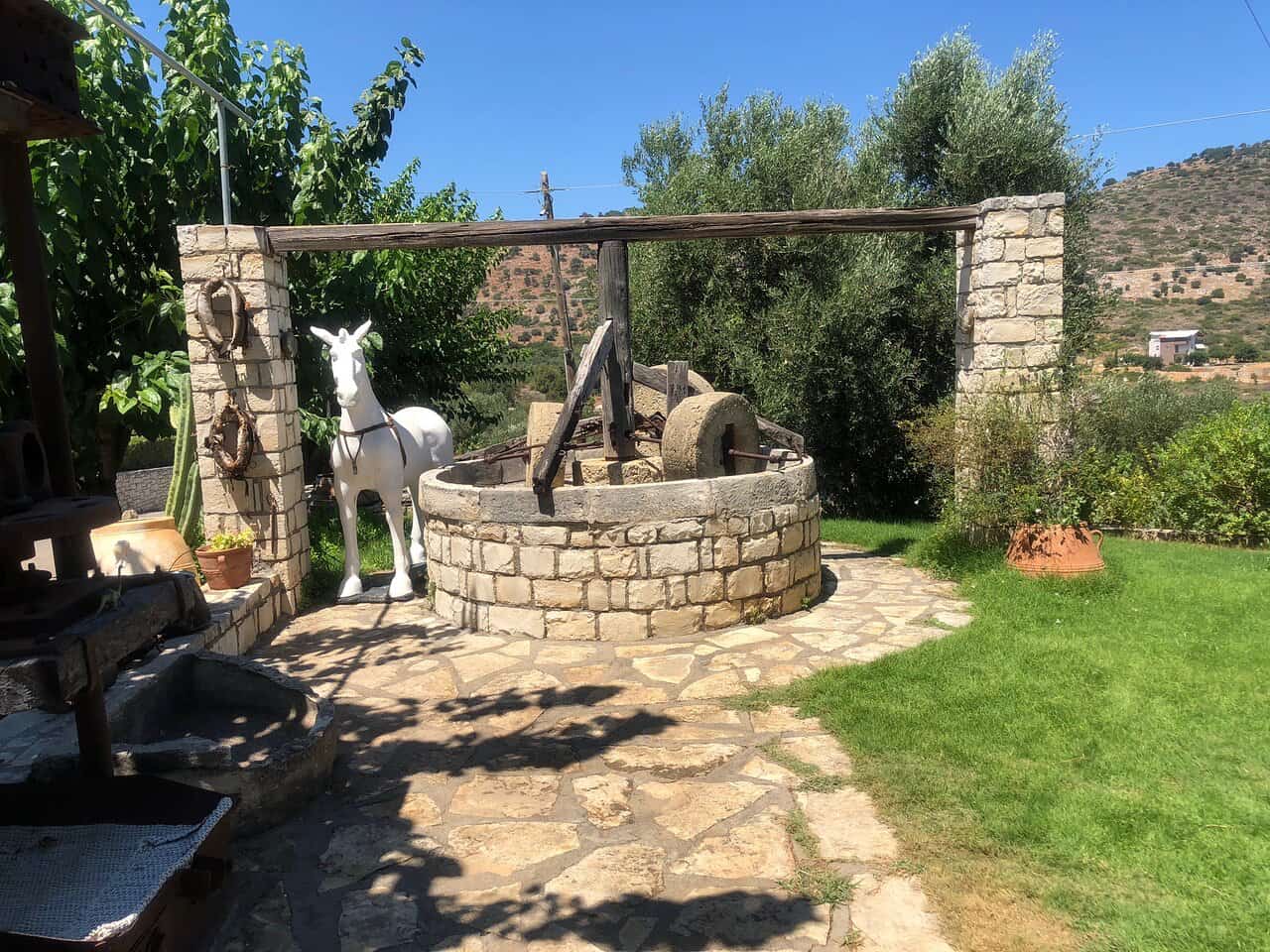 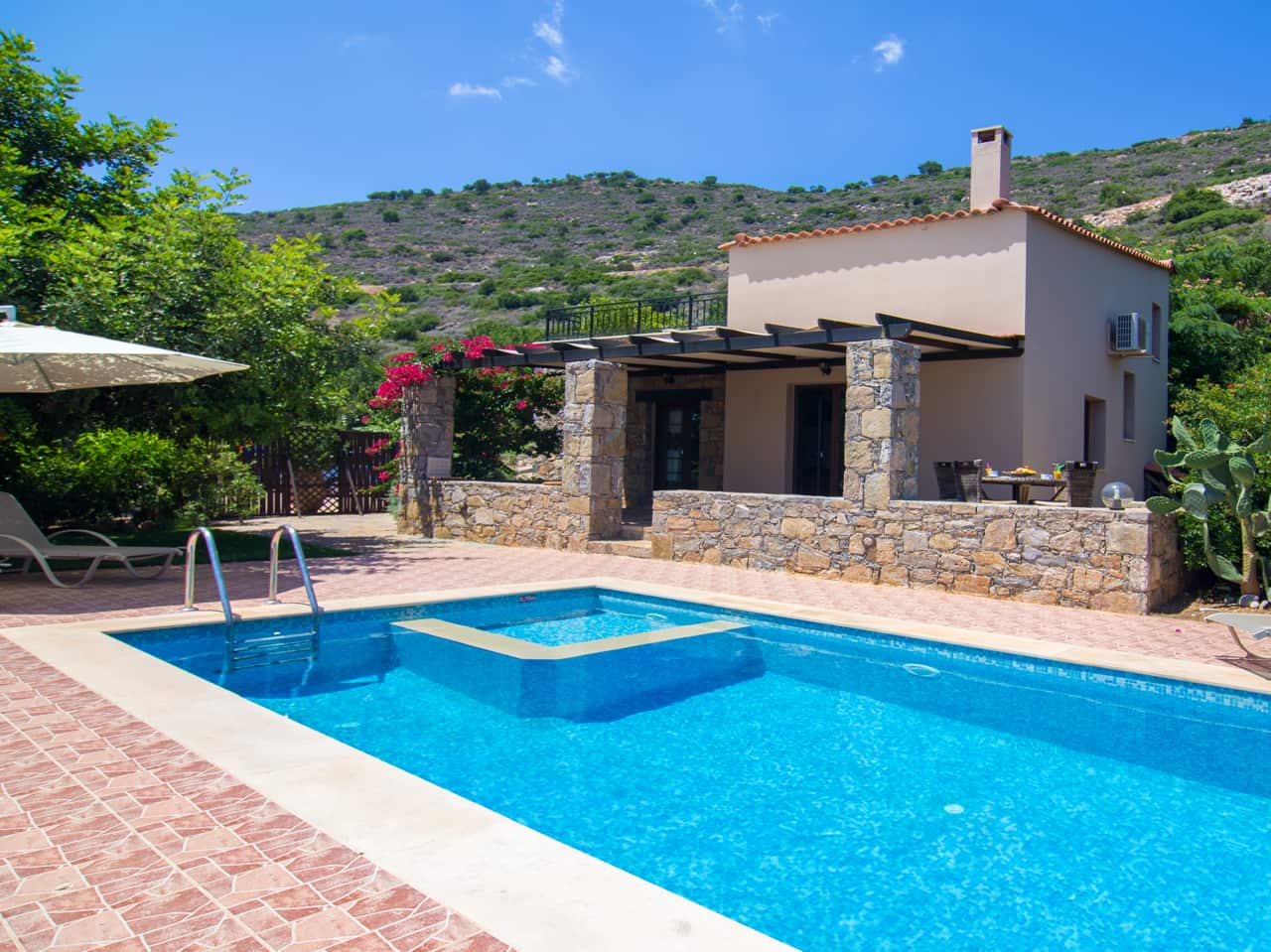 Our superb Melidoni X Village at Melidoni Village ... your best option for your stay here!

Melidoni is a Village in Geropotamos in Rethymno in the Crete Region of Greece. Melidoni is also a listed traditional settlement, a Municipal district and a Minoan sacred cave. Melidoni is at an altitude of 250 meters.

The village of Melidoni is found approximately 27km east of Rethymnon in the Municipality of Geropotamos.

The village now has developed considerably although there are still some old Venetian buildings to be seen in the back streets if you take a walkthrough.

During the summer the village is extremely lively, with dancing and public events. On Clean Monday, the last day before Lent, there is an ancient ceremony only held in a very few places on Crete, marking the day with much festivity including fancy dress.

The village has its own bakery, petrol station and small grocery shops as well as tavernas and kafaneia together with the inevitable kiosk as found all over Greece.

Almost all foreign travellers visiting Crete came to Melidoni due partly to its fantastic cave. However, the cave became more infamous in 1824 when, during the Revolution, some 250 unarmed villagers, including women and children were suffocated when the entrance was sealed and fires lit by the Turks thrown into the cave following a three-month siege.

Not until 1834 when the English explorer Robert Pashley visited Melidoni did Manolis Kirmizakis, the only survivor of the events, inspect the cave discovering the bones of the martyrs. Today there is a large sarcophagus within the cave containing the bones of those killed and the monument is now considered extremely important in defining the independent Cretan character.

- By Air:  From May through mid-October there are direct charter flights to Chania and, more frequently, to the capital Heraklion. Tickets can be bought in advance for almost all flights via our partner website.

- By Sea: The journey is the thing". A superb way of enjoying the journey to Crete is to fly to Athens and take the ferry from Piraeus (Pireas) - the port serving Athens. A still-romantic way to travel by the overnight ferry from Piraeus to Chania-Souda port or Heraklion Port. Tickets can be bought in advance for all ferries via our partner website.

- By Car: If you want to explore the region while you're here, we recommend that you rent a car, other means of transport are limited and/or infrequent. We suggest our sister website, which offers competitive prices and you can collect your car at either airport.

- By Taxi: Book your taxi transfer online easily and safely from the airport or port to any location via our partner website.

Melidoni X Village, a cluster of 5 beautifully and traditionally decorated Villas with private pool, each sleeping 2-6 people, with nice views over Melidoni Village and cretan mountains.

- For those who love walking, Melidoni Village has numerous paths and hiking trails.

- Whether you are a beginner or experienced diver, Angelos and Corinne, the owners of Hippocambo Bali Dive Center, invite you to discover together the world where life began... the Underwater World. Enjoy Scuba Diving at a variety of selected, interesting Dive Sites, always in small groups with safety and personal care from our professional, experienced and friendly instructors. Again you should ask Mareike for it.

- The Bali beaches, which are the closest are located 9 km away, while the beautiful beaches of Skaleta and Geropotamos are 10 km away.

- A worth visit is the nearby Melidoni Cave or Gerontospilios. Gerontospilios is very important due to the archeological findings, some of which are exhibited in the Archeological Museum of Rethymnon. Moreover, the cave has played a tragic role in the history of the Cretan revolution against the Turks, in 1824.

- The nearby village of Panormos has a lot to show for a village of its size and is one of the few unspoiled beach towns on the northern coast. It retains an unhurried, authentic village feel and makes for a  quieter alternative to the overcrowded scene immediately east of Rethymno and at nearby Bali. You’ll find a small harbor, a couple of Byzantine chapels, a post office, a few mini markets and shops, and the best of all in summer concerts and other events are held in a carob mill turned cultural center.

- The old carob-bean mill has been restored by Villa Kynthia's owners. In summer, occasional music recitals and chamber concerts – from classical to Cretan, Spanish to Argentine – are arranged by the Epimenides Cultural Society, as well as street theatre performances. In addition, the Panormos sandy beach is a 3-minute stroll away, with loungers and umbrellas to hire, and a slightly larger beach a little further, with a good beach cafe. The sea is shallow and crystal clear.

- Visit Margarites a pottery-making village which is 10 km away, the European ceramic art center., north of the foothills of the Psiloritis mountain range, where you can buy anything from a tiny vase to one of the great “pithoi” or storage jars. Most of the potteries lie up the hill from the village in little stone-walled enclosures, each with a cylindrical kiln of plastered stone, crowned with a dome of firebricks. The deep-bellied “pithoi ” are direct descendants of the vessels made by the Minoans. In the village, itself are color-washed houses crowded along narrow streets, where each bend reveals a new differently colored perspective (sky-blue is most popular). There are handsome stone archways in the walls of the lanes and ancient frescoes in the church of Agios Ioannis Prodromos. We offer some of the best ceramic workshops there.

- Visit the Arkadion Monastery, this is the most famous historical monastery in Crete, situated near Rethymnon in a very spectacular location. We do not know the exact date of its founding. Some say it was founded by the Byzantine emperor Arcadius in the 5th century AD; others say the founder was a certain monk Arcadius. The 14th century AD is the most likely date for its founding. The historical importance of Arkadi lies in the role it played in the Cretan War of Independence. When the revolution was declared, in 1866, all the leaders met at Arkadi which was chosen because of its strategic position. Ishmael Pasha sent a message to the monks with the bishop of Rethymnon that the revolutionary committee should leave or else the monastery would be destroyed. The head monk refused to obey. Later the Turks besieged the monastery where many children and women had also gathered. Soon the besieged realized that was little hope but they fought bravely. Some blew themselves up with gunpowder to avoid captivity. 114 men and women were taken captives, 864 were killed and very few survived.

- Continuing east from Moni Arkadiou takes you to the archaeological site of Ancient Eleftherna. In Eleftherna, many inscriptions have been discovered, with a jural context on the relationship of artists with society. In the excavations, geometric, Classical, and Hellenistic idols and signs of the zodiac were also found. One of the most important artifacts in the upper part of the body of a statue made of limestone. This stature represents a dressed woman an is famous as “The lady of Eleftherna ”. It is Daedalus' figure and reminds us “The lady of Auxeree”. The lady of Auxeree is a small Cretan Statuette (0,65 metres) that represents a woman wearing a Cretan mantle. It is also made of limestone. It used to be exhibited at the small French town of Auxerre, but now it is a Museum of Louvre. Because of the similarity between the two statues, some scholars assume that “The lady of Auxeree” is from Eleftherna as well.

- Visit the nearby town of Rethymnon which is perhaps the prettiest of Crete’s Venetian cities, with a massive walled Fortezza full of crumbling storehouses and later Ottoman mosques. Its characterful tight-packed streets, lined with Turkish balconied houses and tourist paraphernalia, lead to a historic inner harbour, now disfigured by garish eateries. However, there are some delightful little restaurants and bars in the Old Quarter.

- Chania, maybe the prettiest town in Greece, is an hour to the west, and well worth a day trip for its sea walls, archaeological museum, covered food market, and romantic restaurants.

- Heraklion, Crete’s vibrant capital and home of its finest archaeological collection, and the Minoan palace at Knossos, imaginatively excavated by Sir Arthur Evans, are both 45 mins drive east; don’t miss them.

- The White Mountains are Crete’s most dramatic range very popular with hikers, birdwatchers, and botanists. Join them on a trek through the 16km-long well known Samaria gorge, or maybe you don't like crowds, then a joint quieter small gorges of Ayia Irini or Imbros (you’ll need to start early for any of these).

- On the south coast, you can explore the Preveli monastery and go for a swim at its idyllic, palm-shaded beach.

- Other beaches worth driving to are burgeoning Plakias, gorgeous Damnoni, nudist Ammoudi and hippy Matala, all on the south coast; and the endless open sands east of Georgioupolis on the north (a windsurfer’s dream).

- For more activities on Activities in Rethimno.

At Melidoni Village you will find a supermarket, small grocery shops as well as tavernas, and the traditional coffee shops - kafenia.

The reviews for the Melidoni Village 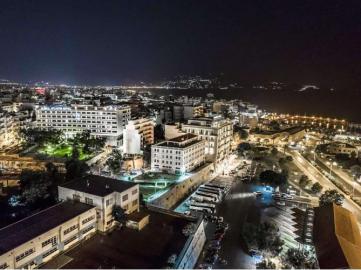 Heraklion or Iraklion the birthplace of El Greco and Nikos Kazantzakis can at first seem a nightmare, particularly if you arrive expecting to see a.. 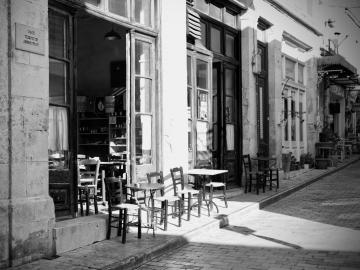 Archanes or Arhanes is a small vibrant town with meticulously restored old houses and pleasant squares a truly remarkable job has been done here. 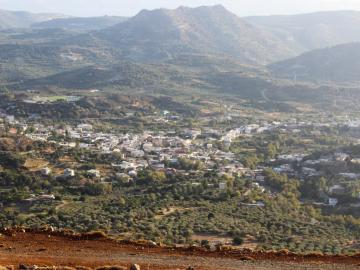 Zaros is a particularly attractive, refreshingly unspoiled village famous for its spring water, which is now bottled and sold all over Crete, and an.. 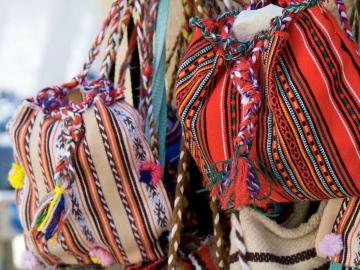 Anogia or Anoyia is a place with history and character with warm people and an excellent cuisine. 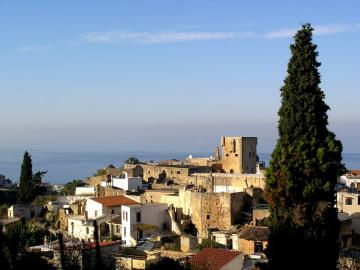 Maroulas is a quiet village situated on the heights above Rethymno, Crete, facing the sea at an altitude of 150 metres and surrounded by greenery, a.. 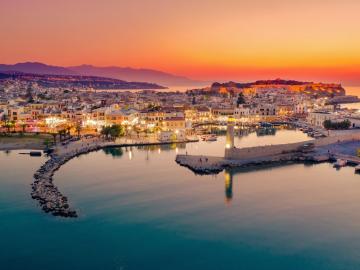 Rethymno or Rethimno combines rarely united features: the old town's charm and history, with proximity to a long sandy beach.