The Monastery of Prevelli has a glorious history due to the active ... ... and leading involvement of its fellow monks in all national endeavorers for freedom ... and education of our people Thus, it merits specific recognition and respect throughout the island of Crete ... the Lower (Kato) Monastery of Saint John the Baptist ... and the Rear (Pisso) Monastery of Saint John the Theologian, which is in operation today ... and it is engraved on a bell of the monastery 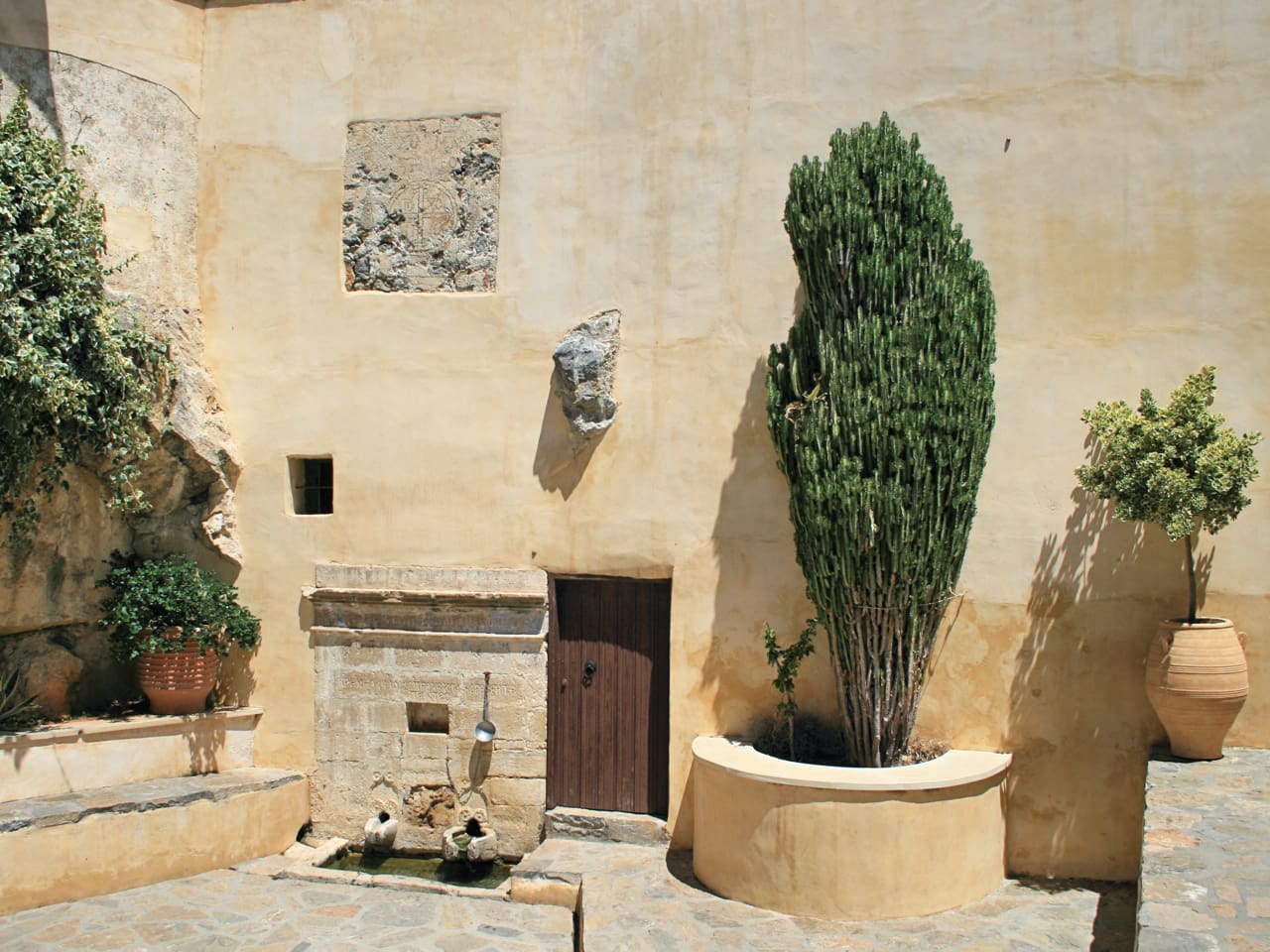 The monastery was probably founded during the Venetian occupation ... ... by a feudal lord known as Prevelis ... is located at the exit of the imposing Kourtaliotis Gorge ... about 35km south of Rethymno and 10km east of Plakias, on the south coast of Crete 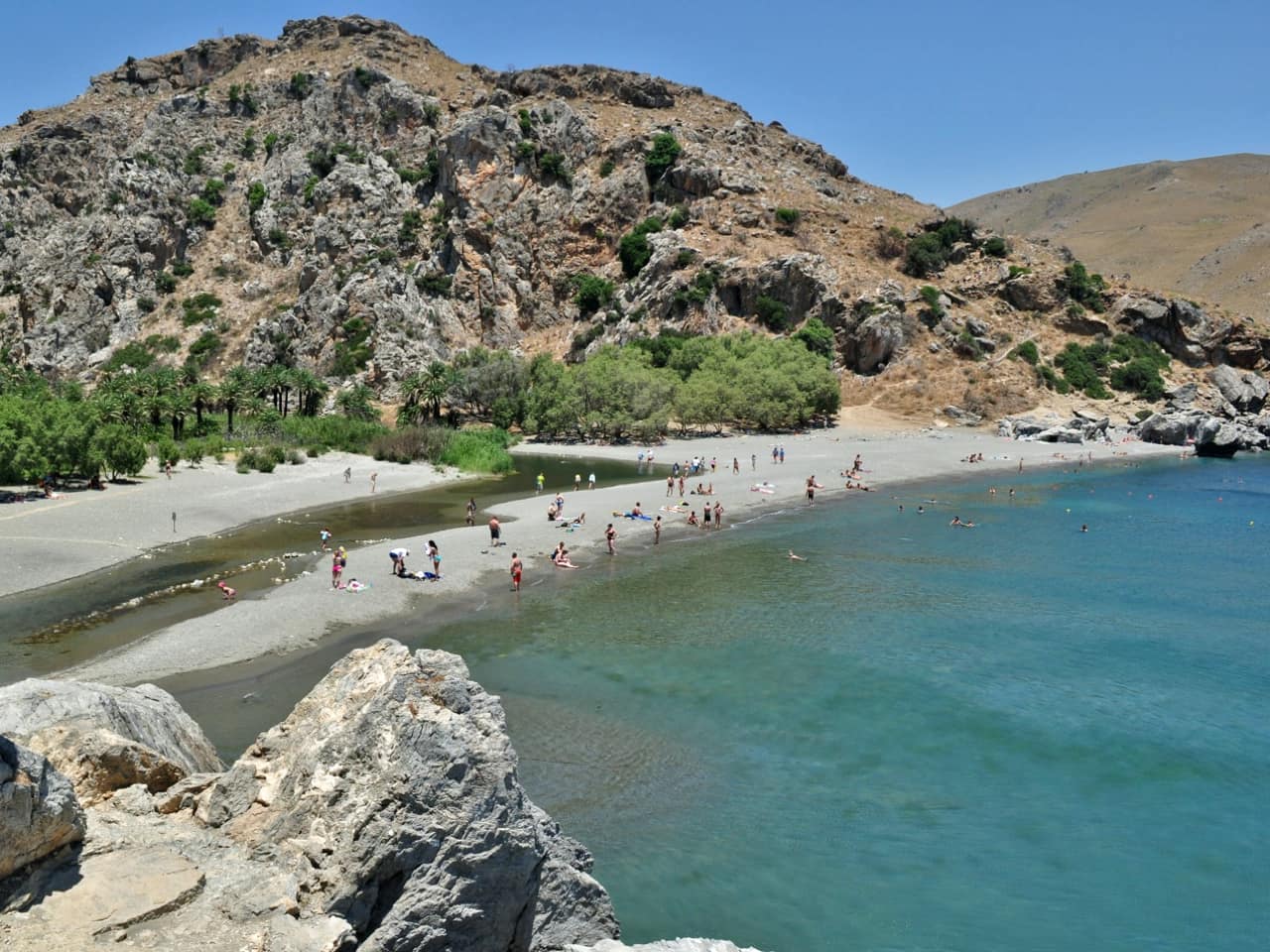 One of the most fascinating places and beaches in Crete, a must excursion - visit during your stay in lovely Crete. Find you own heart at Preveli Beach The small beach next to Preveli Beach

The Monastery of Prevelli has a glorious history due to the active and leading involvement of its fellow monks in all national endeavorers for freedom and education of our people.

Thus, it merits specific recognition and respect throughout the island of Crete.

The oldest date related to the monastery is 1594, and it is engraved on a bell of the monastery. The monastery was probably founded during the Venetian occupation by a feudal lord known as Prevelis.

When in 1649 the Turks occupied Crete, they destroyed numerous church establishments, among them the monastery of Preveli.

The monastery was for three centuries the most important center due to its leading role in the local society of Saint Vassilios and Sfakia provinces, where due to the landscaping territory the Turkish occupation force allowed a peculiar system of political tolerance and a limited state of freedom.

The Monastery of Preveli is a religious center and consequently the place of gathering and social contact of the population.

The role of the Monastery in world war II

The events of the heroic battle of Crete in May 1941 are well known when the Germans forces met fierce opposition from the Allied Armies and the people of the island.

The Monastery of Preveli, desiring to be faithful to its traditions and having no other way to give help, arranged on a daily basis supplies for the Allied army and the locals during the battle in Perivolia, on the outskirts of Rethymno. However, the seizure of Maleme airport in Chania and the advance of the German forces throughout Crete resulted in the evacuation of most of the Allied troops and the departure of the remnants of the Greek Army to the Middle East.

Nevertheless, a large number of English, New Zealand, and Australian soldiers remained on the island because they had no means of getting away.

Although the occupying forces ordered very harsh reprisals against the local population if they provided shelter to these remaining Allied troops, the Monastery of Preveli and the neighboring villages became for many of them a place of safe shelter and a point from which they could escape.

The monks and the local people organized themselves into groups to guard the area, to care for and protect the Allied soldiers who were dispersed in hideouts known only to the locals, where it was not possible for the Germans to track them down, even after constant searching.

Immediately a committee was formed from the inhabitants of the neighboring villages under the chairmanship of Abbot Agathangelos Lagouvardos to deal secretly with the problems and the expenses of safeguarding the soldiers and that committee continued its work right till the end of the occupation of Greece.

The Holy Monastery of Preveli, to mark the occasion of the 60th anniversary of the Battle of Crete, has undertaken the responsibility to erect privately and under its supervision, an international memorial dedicated to peace and remembrance. The Memorial has been erected on the monastery's own land, on a site with a stunning panoramic view, overlooking the Libyan sea.

To help raise money for the upkeep of the memorial a cookery book has been produced. The book contains recipes contributed by people from all over the world - people for whom Crete is a special place, and who, in common with the fighters Tom Dunbabin and Geoff Edwards, who had the idea for the erection of a memorial at Preveli, value the courage and kindness of the Cretan people in sheltering and aiding the allied troops.

A substantial number of icons are kept in the Monastery of Preveli. The icons compose interesting themes, covering a period from the first half of the 17th to the end of the 19th century approximately, an era that the good tradition of Crete has been interrupted by the Turkish conquest.

The painters continue the tradition of the late Cretan school of painting, turning equally into account the austere orthodox tendency as well as the copper painting of the masters of the first half of the 17th century in Rethymno and Chania, influenced by the western ones, mainly the Flemish.

The choices made in the selection of the various themes of the icons indicate a good level of culture of the monks - who purchased these at the end of the 19th century, considering the distance from the urban centers and the isolation of the area.

Learn more about the Preveli Monastery and support the erection of the Battle of Crete Memorial (Preveli project).

The gorgeous Preveli Beach or Preveli Lake or Phoenix is located at the exit of the imposing Kourtaliotis Gorge about 35km south of Rethymno and 10km east of Plakias, on the south coast of Crete.

One of the most fascinating places and beaches in Crete, a must excursion - visit during your stay in lovely Crete.

During the '60s and '70s, Preveli Beach was a favorite destination for the hippies, arriving from all over the world. The large colony of Theophrastus palm trees, gives the place a sense of a tropical landscape.

The river, forming a small lake, 500m long, before emptying into the sea, which has water all year round and most of the visitors love to walk along the river, under the shade of impressive palm trees and other trees You can even swim in the cold ponds formed in the Kourtaliotiko Gorge.

A big fire in 2010 burnt almost everything of this paradise, but paradoxically the palm grove recovered most of its damage quite rapidly.

At the exit of the river, a sandy beach with pebbles and sand is formed, with seawater being very cool due to the river. For the romantic ones, there is a beautiful rock reminding of a heart on the east part of beach. Luckily, the beach is not well organized because the area is protected, therefore there are not any sunbeds and umbrellas.

It is fairly easy to get to Prevelli Beach by car. If you drive from Heraklion Town, the trip takes about one and half hours and follows the coastal road towards the west, then driving south through the heart of the island. There is a parking area close to the beach and you have to walk the rest of the way, following the stairs down from the cliff. It takes about 10-15 minutes to go down the trail and about double that time to come back up. Another alternative can be to drive to a spot to the East of Preveli beach from which you can easily walk to the beach. There is a road that you could follow from the old Preveli stone bridge.

Preveli Bridge is a single-arched bridge from 1850 that may no longer serve its purpose today but is still accessible on foot. It bridges the Megalopotamos which later flows across Preveli beach and into the Libyan Sea.

There are no direct buses from the capital of Heraklion to Preveli, the best choice would be to rent a car and drive there. In addition, there are half or full-day boats trips to Preveli beach from the nearby town of Plakias or the village of Agia Galini.

- East of Preveli Villas is our closest option, with stunning sea views, meters away from the beach, warm hospitality from Eleni and her family.

- Kionia Apartments, we totally loved this place! It's quite deserted but there's a fine restaurant within walking distance and it's absolutely quiet. Good for a couple of days total relaxation.

- Notos Apartments, enjoy the sound of the Libyan sea, waves, Meltemi wind and the strong touch of the sun ...  and relaxing in the fresh sea breeze!

- The Old Fishermen's House Anatolika - South Rethymno, a simple but charming cottage perfect for escapists and is located a few meters away from a beautiful secluded sandy beach on the south of Rethimno-Crete, nearby Kerames Village and just 2.8 km away from the superb Preveli Palm Beach and Monastery.

The reviews for the The Preveli Monastery & Beach Agia Roumeli is peacefull small and feels like a village somewhere ... nowhere. Frangokastello (the castle of the Franks) is a small seaside village located on the south coast of Crete, Greece, about 12 km. east of Chora Sfakion.. Loutro is such an incredibly soporific place, where there's absolutely nothing ( ... almost ) to do but eat, drink and laze - and where you fast.. Plakias Village, on the south coast - directly south of Rethymno about 30 km south of Rethimno small town. It is part of the municipal unit Foinikas. Sfakia or Chora Sfakion is squeezed between the sea and the mountains. Generally Sfakia as a region has a very unique and dare we say a genuine,.. Sougia Village is one of the most laid back and refreshingly undeveloped beach places along the unique south coast of Crete, southern of Chania,..